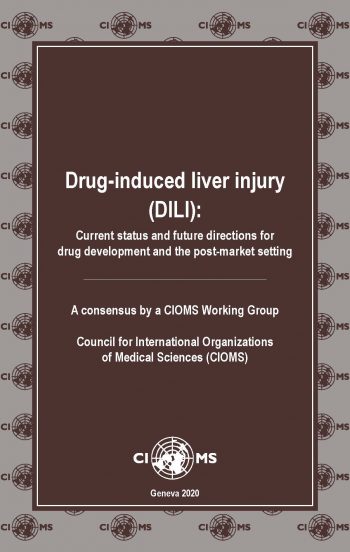 The CIOMS consensus report on drug-induced liver injury (DILI) was published in June 2020.

The incidence of drug induced liver injury (DILI) is a growing challenge because of the ever-increasing number of drugs used in medical care. DILI is responsible for more than 10% of all cases of acute liver failure, posing a major clinical and regulatory challenge. In a recent and well-executed population-based study, the crude annual incidence of DILI was 19.1 cases per 100,000 persons (95% CI, 1.54-23.3).

The clinical pattern of DILI is diverse and can mimic almost any form of liver disease, ranging from asymptomatic elevation in aminotransferases to severe disease such as cirrhosis or acute hepatitis leading to acute liver failure, making it difficult to establish an easy and early diagnosis. DILI remains largely unpredictable and is not amenable to efficient preventive measures.

In many instances, the hepatotoxic potential of a medicine can only be recognized once a product is on the market, and DILI is one of the most frequent reasons for withdrawal of products from the market and modification of labelling. Being an important cause of mortality and liver transplantation, and a leading cause of attrition in drug development, DILI remains a public health issue of great importance which needs additional international consensus guidance.

In 2017, CIOMS launched a Working Group composed of key stakeholders, including regulators, academia and industry partners, to address the present knowledge and practice gaps related to drug-induced liver injury (DILI). The objective of the group was to formulate pragmatic, consensus-based recommendations to address the issues described above.

From July 2019, five WG members worked together as editorial team with support from the CIOMS Secretariat. The team met twelve times by teleconference to work on the draft WG report. The draft was circulated to the full Working Group on 15 April 2020 for comment, and was finalized by the editorial team in line with comments received.

CIOMS Working Groups usually take 2-4 years to finalize their guidance and recommendations. Most groups hold two in-person meetings per year, with telework in between. The groups make use of collaborative efforts and capitalize on existing initiatives in order to provide output that is as comprehensive as possible, does not duplicate other efforts and has added value.